"Something 4 You Haters' Book Review by: Celusreal

I just read, “Something 4 You Haters”, written by world renowned author Robert S. Womack. The fiction novel follows the life of street smart Shihe Womack, whose sharp and cutting edge mentality keeps him alive in the projects. While the story is based in the mean streets of South Central,California, Shihe’s livelihood involves upscale robberies, medieval
torture, and removing individuals who double cross him.

Since experiencing the cold blooded streets at an early age, he learned to trust no one but to honor those who had his best interest at heart. Being born into a family who didn’t for him and was responsible for his cold-cut nature, Shihe got his start in the streets pushing drugs at a young age. His knowledge and awareness of the streets at an early age would manifest into a lifestyle of crime that would make him one the most feared and respected soldiers on the street.

By his side his lady, “Little Momma” who could hold her own, remains Shihe’s partner in crime throughout the novel. Having a tough as nails yet lady-like feminine nature, Little Momma’s way of handling missions and removing those who pose a threat will leave you astonished at her aggressive ability. Her brutality against her and Shihe’s foes remains a perfect match to Shihe’s seek and destroy mentality.
Through out the novel you will get to read of their true love in the world of
killing and survival throughout South Central. Both characters “ride or die”
relationship also experiences its twist and turns as each worry about each
others well being when handling business in the streets. 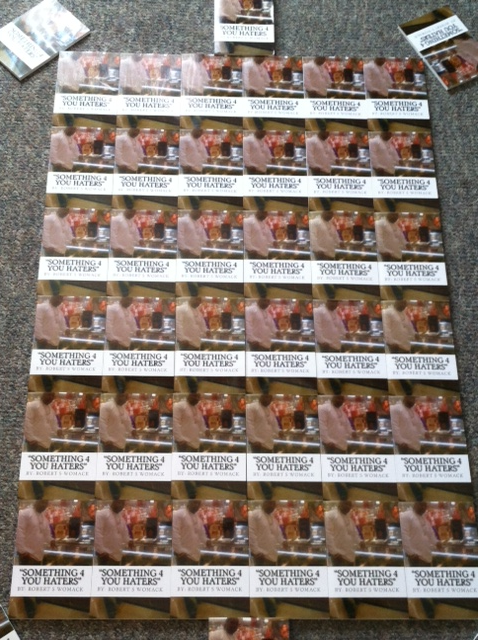 Every second of their lives is submerged in grinding to see another day and remaining each others protector even when those closest to them set them up.The feature I loved about the novel the most was its vivid detailed imagery in its passages describing the atmosphere in which the characters lived and handled business.

Author Robert Womack’s
imagination will capture your attention as you read from page to page following the saga of Shihe, driving getaway cars, dismembering informants and seeking revenge on those who betrayed him. As you read it’s as if the images of the hardcore high risk environment are on a big screen being shown right in front of you!!!

After reading the novel for my second go around, I suggest those in the Black Community interested in novels detailing hardcore adventures of a Black male and female’s life while remaining on top in the streets read Robert S. Womack’s “Something 4 You Haters”!!! I foresee it being on the big screen in the near future so read the novel immediately to be able to say you did before it hits the theaters!!!!!

Robert S. Womack is a self published author and writer for the examiner. Born and raised in South Central, California, Womack began writing stories at a young age which eventually motivated him to become an author.

You can purchase his novel “Something 4 You Haters” on Amazon Books, Google Books, Barnes and Noble, Borders, Amazon Kindle and several other literary publication providers. You can add him on facebook search engine Author Robert Womack or you can visit his website http://www.wix.com/robertwomac4/urban-fiction-author-robert-s to learn more about his company and to purchase his novels.
Peace Out,