Starting out hustling at an early age, gave Shihe the knowledge to out think half the people that he came in contact with. Knowing the ins and outs of the streets of South Central, he made his money and had a no non sense code that he faithfully lives by. Not interested in the hood rats that stay in his face, it was one female that attracted his attention. Or was it her drive to make money on a dangerous ass level, just as he was trying to do?

Little momma was a sexy, dangerous type of female, that knew exactly how to get money and live the busters lifeless. Little momma know that the streets ways the key to making the money that she needed to get her business started. Seeing that the bank was out of the question for a loan, she targeted the trick ass niggas that roamed South Central Los Angeles on a daily.

Knowing Shihe from school, little momma watched how he got down and stayed dissing females, that tried to talk to him because his pockets were kind of healthy. With each passing day of school the two become closer and closer, leading them to the plots of different suckers, that were asking to get hit. This sounds to be a promising journey of coming up and laying haters down. 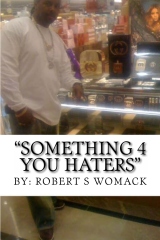